Today was fine. Nothing especially notable, unless you count the bagel delivery I ordered for this morning’s breakfast. There were 18 bagels when they arrived and right now there are four bagels left. I ate one for breakfast and another for lunch. Mr. December didn’t have any. That means the kids ate 12 bagels in one day.

I sanded the drawer and desktop that I’m working on and then created a solid window covering for the giant round window in our attic (we’re trying to make it dark enough to watch movies with our projector.) The kids did some school work — I halfheartedly encouraged them to keep working and then finally I gave up and took a nap. It was glorious.

Tonight, though… that was fun! Mr. December picked up a PlayStation and a bunch of Rock Band games from a friend of ours (thanks, friends!) Around 4:00 we set it up and started playing to “make sure it was working properly.” The children gradually joined us downstairs and we ended our song to a chorus of, “Can I play?” “I want to be the drummer!” “Is it my turn yet?” 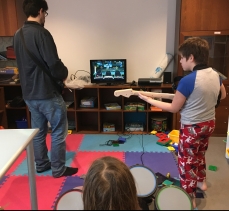 If I had to guess, I’d say that we played about three hours of Rock Band tonight, all six of us (E was the backup dancer.) It was enjoyed by all (by ALL!) and will probably feature prominently in our weekend plans. K and N are each planning to spend some time in practice mode before we all play together again, so I’m going to sleep with my earplugs in tonight (because you KNOW they’ll start as soon as the sun comes up.)

As I chased them upstairs I was still humming “Dead or alive”; they asked me to please sing something else. This led to requests for songs from their favourite Broadway musicals. So it was that even though I haven’t sung them to sleep in ages — I’m usually too tired and harried for that — tonight I serenaded them with their favourites from The Secret Garden and Ragtime. And for the first time in a long, long time they didn’t ask me to stop. They were even impressed by my ability to belt out the songs while they dogpiled on top of me.

Note to self: Singing feels good. Singing in the stairwell of our house (which has a high ceiling and lovely acoustics) feels even better. Singing for one’s own children and NOT getting boo-ed out of the room? Priceless.