Last night, before I went to bed, I did a few things around the house. 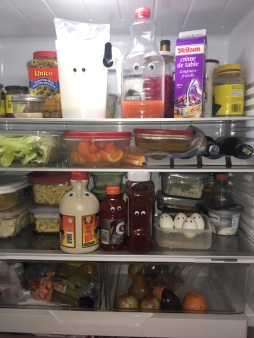 And putting out fruit so that it gets eaten…

And reorganizing R’s closet. Man, that girl has lots of clothes. I moved them all into my room for safekeeping and replaced them with doll clothes. Much neater! 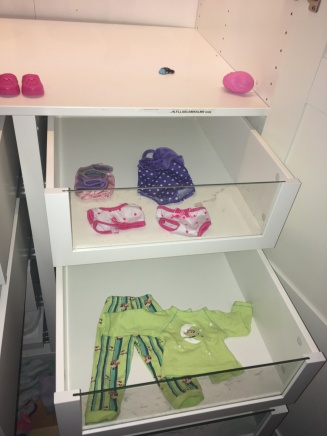 K heard me moving around in R’s room and offered to help. Apparently she pilfered a few things from our walk-in closet while she was putting R’s clothes in there, because when I went downstairs to turn off all the lights I found this… thing… in Mr. December’s office chair:

Please don’t ask me. I don’t understand K’s penchant for making effigies of family members. At least she doesn’t use them like voodoo dolls.

Anyhoo, when R opened her closet this morning I stood there expectantly. She looked puzzled.

“APRIL FOOLS!” K and I crowed.

“But it’s not scary at all!” She said, obviously still confused.

I don’t know where she got the idea that April Fools jokes were supposed to be scary; I always thought they were about the silly and unexpected (and possibly the messy and inconvenient.) R’s reaction was a bit of a let-down.

Know what else was a let-down? the realization that this is our life for the foreseeable future. The family trip we were planning — four weeks in the UK — won’t be happening. The days filled with being the IT person for everyone, being constantly available to everyone… those are here to stay for weeks, maybe months. It just hit me today like a ton of bricks. I think I’m having an existential crisis.

What’s it all for? Who cares if R never hands in her French homework? Does it matter if we do school stuff at all? Would I be better off unschooling them? Wouldn’t we all be healthier and happier if we weren’t tied to someone else’s schedule and could sleep as long as we wanted instead of getting up and dressed in time for the morning Zoom classes?

I was reminded of Yuval Noah Harari’s book Sapiens, in which he attributes our success as a species to our ability to believe in shared fictions (that might not be the word he used, but you get the point.) And that reminded me of this gem of a comic: 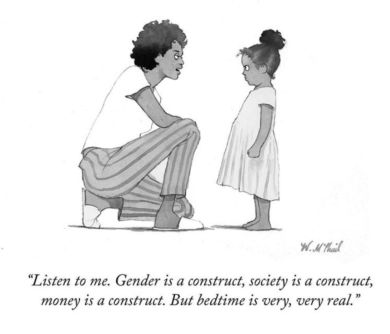 The real things that were bothering me today were the lack of personal time — as in when I’m awakened from a much-needed nap to lend a kid my iPhone for a FaceTime call with her friend — and the relentlessness of everyone’s requests for assistance. So I called a family meeting.

“Look,” I said, “I’m going crazy. I’m feeling burned out. I — can you just stop talking for two minutes? … Right. I’m overwhelmed and we need to set some boundaries. So I think that I’m — Geez, you guys! What did I just say? Shush! … I’m setting some times when you absolutely may not disturb me. I’ll just be unavailable unless it’s an emergency. And — ugh, why do I even bother? BE QUIET! — … So. Before you ask me for something, ask yourself to try solving it on your own. If you have tried and you really can’t, then ask a sibling. If neither of you can, then you can ask me. But seriously, I need you to not ask me for help with every little thing. You guys are very capable — ”

“Eema,” R interrupted, “When we’re done here, could you please help me find a pencil so I can do my sketching?”

Nobody else understood why Mr. December and I laughed so hard at that. Maybe there was some kind of language barrier. Did my monologue not register at all?

I kicked the kids outside relatively early today. They probably spent a couple of hours in the backyard, happily digging a big square pit behind the swingset. My sources tell me they want to flood it so we have a little pond. I’m just glad they were out there and not in here. My mood was such that I was not really fit for human company. Or any company.

But hey, it was taco night, and later I pulled out a tub of ice cream for everyone to enjoy, so I may have salvaged some of the evening for the kids. I definitely salvaged it for myself: Mr. December and I spent an hour watching John Oliver’s last show and enjoying quarantine-related musical parodies by the Holderness Family. That and a nice cup of tea have me feeling pleasantly tired. I remember feeling anxious and depressed today, but I’m not feeling it anymore. And that’s a good thing.