I woke up at 5:30 on a Wednesday morning. This was nothing particularly new, and I figured I’d go pee (for the fifth time that night) and then have a snack before going back to bed. I was having mild contractions, but this too was old hat and I refused to get my hopes up that this might be the real thing. I used the bathroom, had a glass of milk and went back to bed.

I couldn’t sleep – the contractions were intensifying and it was impossible to sleep through them. I decided I really needed a cup of tea, so I made one while the bathtub was filling. I nudged Mr. December awake and told him I had paged the midwife. “Are you sure this is it?” he mumbled, opening one eye just a crack. “Yes, I’m sure.” I snapped back, “And she’s on her way right now, so for God’s sake, get up and PUT SOME PANTS ON!” I’m pretty sure it was my tone of voice that convinced him.

I got into the tub with my iPod (cleverly sheathed in two ziploc bags) playing some solo piano music and breathed through some contractions. I sipped my tea. Mr. December appeared at my elbow with deviled eggs and I ate half of one before the next contraction demanded my attention. The midwives arrived and checked me – I was somewhere around 7 centimetres and fully effaced. The baby’s heartbeat was good. I breathed through some more harsh contractions.

I remember from N’s birth, feeling out of control with each contraction and feeling physically wrung out in between. “It’s not actually about the pain,” I blithely told people later, “you just have to manage the intensity!” It may have been true at the time, but this time I raised my head from its resting spot on the edge of the tub and announced to the midwives, “This time it’s about the pain. This f***ing hurts!”

That being said, I was completely silent during contractions. Mr. December got the birth on video, and it looks like I’ve just decided to rest on the edge of the tub for a minute or two. It looks peaceful and serene. I can assure you I didn’t feel that way. But it didn’t feel scream-worthy, and besides, my two kids were asleep in their bedroom a mere fifteen feet away from where I laboured.

Right, the kids. We tried to give them (and my parents) some extra time to sleep, so we didn’t call the parents until about 7:00 a.m. They arrived eventually (later I learned that my mom had almost fainted at the thought of me in labour) and began ushering the kids out of the house. N was too sleepy and snuggled against my dad to notice me as he passed the bathroom, but K saw me and doubled back. I asked her for a good-luck kiss; she sneezed on me instead. And then the kids were gone, and suddenly I needed to roar. It was around 7:45 a.m.

The student midwife asked me to shift position so that she could hear the baby’s heart. I did, but as she was maneuvering the Doppler scanner, I pushed her hand away and got back into my position over the side of the tub just in time to roar through yet another contraction. When it was over, she asked me to try again. This time I managed to lie there through a contraction, but it was more painful than if I had been on all fours. I wondered whether it would feel better to do some mini-pushes through the contractions. I tried, but it just wasn’t going anywhere. I was roaring through contractions by this point, and the midwives gently asked me to turn around so that they could have access to the baby.

Suddenly I got the unmistakable urge to push, and I did. My water broke but nothing else happened, or so it seemed. I pushed again and got that “pooping out a bowling ball” feeling, but instead of relief as the whole head slid out (as it did with N), I felt it stop halfway when that contraction ended. Seriously, there’s nothing worse than that head-half-in-half-out feeling.

One push later the head was out – what a relief! – and I knew what would come next: a single push and the feeling of little arms and legs as the body slid out of me. That didn’t happen. The body felt stuck. As the next contraction hit me, I yelled, “Jeez, will you guys just PULL!?!?” The midwife did some maneuvering with the shoulders, and our baby was born. It had only taken a minute, tops, from the birth of the head to the birth of the rest of the body, but it felt a lot longer than that. It was 8:13 a.m.

I turned around and sat while they put the baby on my chest. It hadn’t cried yet – had it breathed? – and the midwife rubbed the baby vigorously until it did. At this point I looked at Mr. December (still manning the camera) and held the baby up, butt-first. “Call it, honey,” I instructed. “Is it a boy or a girl?” “A girl.” came the reply.

Our girl was quite cold and wasn’t breathing the way she should be, so the midwives took her to the “warming station” they had devised and gave her some oxygen and wrapped her up next to a hot water bottle. They had asked if I wanted to get out of the tub and go with her, but I decided I’d prefer to deliver the placenta in the tub and then take a shower. See where my priorities were? I was stinky and couldn’t wait to get clean. Mr. December was with the baby anyhow, and our midwives are lovely, and I figured they could do without me for five minutes while I worked on feeling a bit human again.

By the time I got back to the bed the baby was warm and pink and ready to try nursing. She latched beautifully, after I was reminded that newborns need a lot more support and guidance than older nurslings. How quickly I’d forgotten!

The midwives checked me for tearing and found only a very small one that required no stitches. Someone brought me breakfast, and the midwives left Mr. December and me to snuggle with our daughter as they gathered in the dining room to eat and debrief. A while later they returned and completed the newborn assessment (she was 22 inches long and weighed 9 pounds and 4 ounces – a pound and a half bigger than N, and two and a half pounds more than K!). Around 11:40 that morning, the midwives were on their way to the clinic to get on with their day.

This birth didn’t quite have the magical feeling of N’s. Because the baby’s shoulders were getting stuck, or maybe because she was so big, pushing wasn’t quite the relief I remembered it being. Also, there are a few pretty unsavory details I’ve left out (suffice it to say that your body deciding to empty your intestines before labour is good; your body making the same attempt during labour is really, really gross). That being said, I’m still glad we decided on a homebirth again. The atmosphere was so peaceful – there were no interruptions to break my focus – and having the midwives to support me throughout was absolutely priceless. They handled what could have been a very bad situation (shoulder dystocia) so calmly and efficiently that Mr. December hardly noticed that anything was amiss, and even when they had to take the baby from me to get her breathing, they asked my permission to take her and offered me options. They even cleaned up and left us with only a bag of laundry, a sealed bag of garbage, and a placenta in my freezer (we need to plant another tree).

And now our baby girl is here, and our life is forever changed. Oh, and I feel positively svelte. 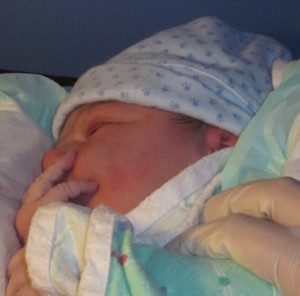